They are the two largest uranium producers in the world, and I see them as a leveraged bet on the recovery of the uranium price.

Kazatomprom looks better in 2019, but Section 232 in the USA matters a lot.

Cameco would be the main beneficiary from a quota on US uranium production.

Cameco (NYSE:CCJ) and Kazatomprom are the two leading uranium producers in the world. They are among a handful of well-established, publicly-traded uranium firms that have a combination of producing assets, FCF, and a solid balance sheet, and can be viewed as a leveraged bet on the recovery of the uranium price, which ended a seven-year bear market in 2018.

Cameco owns 69.8% of McArthur River, which is the world’s largest high-grade uranium mine with reserves of 273.6 million pounds of uranium at an average grade of 6.91%. However, the project is currently on care and maintenance due to the continued uranium price weakness, and the company wants to wait until uranium prices recover to restart it. According to the 2012 technical report, McArthur River has an estimated mine life of 23 years based on a production rate of 18 million pounds per year. The estimated average operating cost per pound is just C$14.97 over the mine life, which means that the project should generate significant earnings even at today’s low uranium spot price.

Overall, Cameco expects to spend between C$130 million and C$160 millionon care and maintenance in 2019. Besides McArthur River, Cameco also has the Rabbit Lake mine on maintenance, as well as several operations in the USA. All of these operations are currently reducing worldwide uranium supply by more than 26 million pounds.

In 2019, Cameco expects to produce around nine million pounds of uranium from the Cigar Lake mine in the Athabasca Basin and the Inkai project in Kazakhstan, which is a 40:60 JV with Kazatomprom. 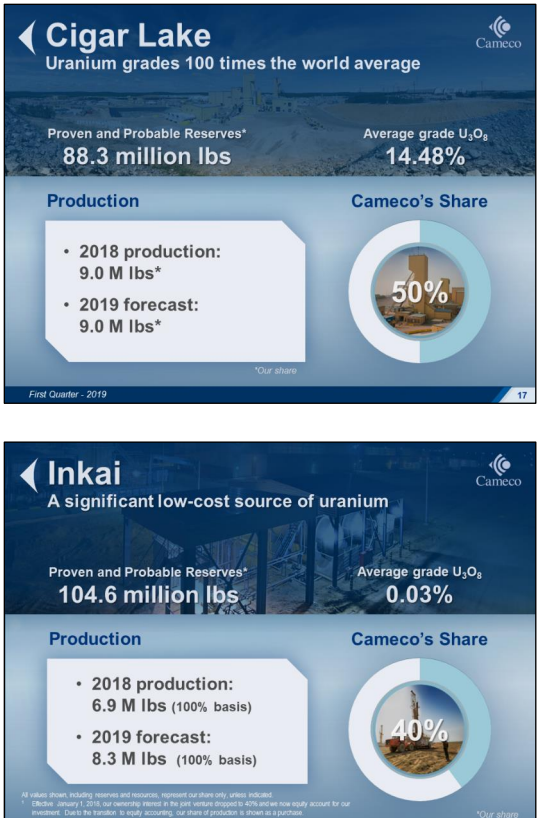 Cameco also has a fuel services business, which is expected to generate revenues of between C$280 million and $310 million in 2019. 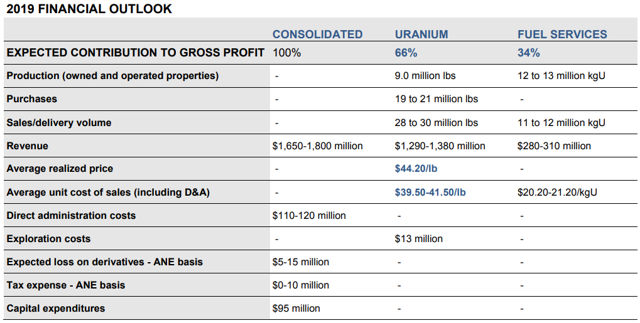 The company has a pretty strong balance sheet with C1.2 billion in cash and short-term investments at the end of March. There’s a C$500 million debenture maturing in September 2019, and I expect the company to repay it.

In the first quarter of 2019, Cameco swung to a loss, but it managed to boost its total portfolio of sales commitments by about 25 million pounds to around 150 million pounds. In the past, the company has mentioned that it was looking for a price in these long-term contracts of over C$40 per pound, so I view this as a very positive development.

The uranium business is unique, in the sense that most miners rely on long-term contracts with utilities, which are usually arranged at a premium to the spot price. For example, in 2016, Berkeley Energia (BKLRF) managed to secure an off-take agreement for two million pounds annually over five years at a fixed price of $43.78 per pound at a time when spot uranium prices were hovering around $18 per pound.

In 2009, Kazakhstan became the largest uranium producer in the world with almost 28% of world production. In 2018, the country had 12% of the world’s uranium resources and produced about 21,700 tU.

Out of 17 uranium mines in Kazakhstan, five are wholly owned by Kazatomprom, and 12 are joint ventures with foreign equity holders (such as Inkai). The grades are low, but the operating costs are very competitive as the projects use in-situ recovery ((ISR)) mining methods. These methods involve leaving the ore where it is in the ground and recovering the minerals from it by dissolving them and pumping the pregnant solution to the surface where the minerals can be recovered.

In 2019, Kazatomprom plans to produce around 13,000 tonnes of uranium on an attributable basis at all-in sustaining costs of just $15-16 per pound.

The company is currently constraining production with the aim of bringing the uranium market into balance and boost prices. It plans to keep a 20% reduction against its existing licence volumes for 2019 and 2020.

On April 15, the US Department of Commerce (DOC) submitted to the White House the results of an investigation into the effects of uranium imports on US national security. The president has up to 90 days to decide whether to act on the DOC’s findings and recommendations, which have not been made public.

The investigation falls under Section 232 of the Trade Expansion Act of 1962 and was triggered by the filing in January 2018 of a petition by two US uranium companies which claimed that the loss of a viable US uranium mining industry would have a significant detrimental impact on the country’s national, energy and economic security, and its ability to sustain an independent nuclear fuel cycle. They sought a quota to limit imports of uranium into the US, thus reserving 25% of the market for domestic production.

The USA is the largest consumer of uranium in the world with 98 operating reactors, but production is almost non-existent today. In the first quarter of 2019, just 58,481 pounds were produced domestically. Production currently comes from four ISR facilities located in the state of Wyoming.

I don’t think that the USA should take any actions regarding this petition, but the decision could become a political one, especially so close to elections.

If a 25% quota is reserved for domestic producers, I think the main beneficiary will be Cameco. The company used to be the largest uranium producer in the country before it put its local assets under care and maintenance. The opportunity is around 11 million pounds per year, and Cameco may be able to ramp up output to about five million pounds per year in a few years, thus capturing almost half of the market.

Cameco focuses on conventional mines, while Kazatomprom specializes in ISR. The latter thus has very low costs and can avoid placing operations under care and maintenance in this weak market.

Based on the 2019 guidance, Kazatomprom presents a better investment opportunity. However, Cameco still has a strong balance sheet and could be the big winner from Trump’s Section 232 uranium decision. While the president has 90 days to decide whether to act, similar cases have been resolved in around 50 days, so a decision could be just around the corner.

Overall, I think both companies represent a compelling opportunity to bet on the recovery of the uranium market.

Cameco is listed in the USA and Canada, while Kazatomprom is listed in Kazakhstan and the UK (London Stock Exchange symbol KAP).

If you like this article, consider joining The Gold Commonwealth.

Disclosure: I/we have no positions in any stocks mentioned, and no plans to initiate any positions within the next 72 hours. I wrote this article myself, and it expresses my own opinions. I am not receiving compensation for it (other than from Seeking Alpha). I have no business relationship with any company whose stock is mentioned in this article.

Additional disclosure: I am not a financial adviser. All articles are my opinion – they are not suggestions to buy or sell any securities. Perform your own due diligence and consult a financial professional before trading.