One of the greatest moral dilemmas that has been creeping into the everyday activities of specialists working with coal, oil and in some cases even gas (despite its being perceived a natural bridge to a low-carbon future) could be phrased in the following way: how do you stop producing fossil fuels when you still have cheap ample reserves? In this context coal stands out – its relative inferiority in terms of environmental pollution prompted governments in developed economies to ban its future usage. Yet whenever its production is not curtailed by government-mandated cuts, producers simply continue to extract as much coal as possible. Straight in the middle of the so-called European approach to coal lies Germany, an erstwhile bulwark of the coal industry. Can it eventually survive without coal?

In stark contrast to oil and gas – of which Germany has traditionally been a major net importer and in both cases looking back to a more than 50-year history of depending on primarily Russian hydrocarbon riches – Europe’s leading economy has substantial reserves of coal, lignite in particular. In fact, Germany remains the world’s largest producer of lignite and burns most of it for power generation, accounting for some 22 percent of the nation’s gross electricity output. Ironically, lignite production is more CO2 intensive than hard coal as it is done by extracting coal from open-cast pits, nevertheless, its mid-term future looks a lot better than that of hard coal mining in Germany.

Whilst lignite remains economically competitive, Germany’s hard coal production went downhill after the government ended its subsidy schemes. The last hard coal mine closed its gates in December 2018, ending a 200-year history of the Ruhr Region and potentially starting a new development phase of Westphalia, a geographical phenomenon inextricably intertwined with coal.
Yet even though Germany ceased to extract hard coal itself, it continues to use it. Around 12 percent of power generation is coming from hard coal, imported primarily from Russia, Canada and the United States. Once Germany’s flagship industry, the steel sector consumes almost 40 percent of the nation’s hard coal.

If Germany is to remain an industrial powerhouse, it would need to keep on importing hard coal as it remains an indispensable element of steel-making. This would in turn compel it to rely on imports from Russia (Murmansk and Ust-Luga, to be precise), thereby creating a triple dependence on Russian hydrocarbons. If one is to take monthly statistics in the past 3 years they would find that 53 percent of all imported coal came from Russia, a dependence which has palpably deepened in the past 24 months thanks to the vicinity of large coal-handling ports in the Russian Baltics. Oil, gas and coal – in all three instances Germany imports more than a third of its needs from Russia; in the case of gas it will be significantly higher very soon with NordStream-2 being slated for a mid-2020 commissioning and Groningen going to a government-mandated halt. 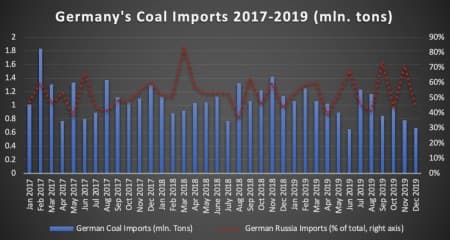 It would be also interesting to see how the German government will resolve the issue of compensated closures, especially for lignite mines. Hard coal is an easier nut to crack – economically unviable, operationally underutilized (only some 6GW of the existing 20GW hard coal capacity was used in 2019) and widely unpopular due to a lack of serious lobbying effort. For hard coal, the 8GW set as target for 2030 does seem fairly manageable. Yet the government’s efforts to fix the first lignite closures by 2022 are still subject to discussion with mine operators, not to speak of its flaunted intention to launch enforced closures from 2027 which currently seems to be a task too complex to effectuate this quickly.Related: Oil Glut Overshadows Geopolitical Risk In 2020

Interestingly, running somewhat counter to the general narrative as heard from advocates of wider renewables usage, the drop in German coal consumption is not fully supplanted by the mix of gas and renewables. Let’s look at 2019 a bit closer. Both lignite and hard coal usage dropped a whopping 20 percent year-on-year, coming from debilitating (and mandatory) carbon emissions prices and renewables being prioritized in terms of grid access, whilst renewables grew by 3 percent in 2019. In absolute terms the situation is even clearer – coal usage dropped by 20.5 million tons of coal equivalent, whilst renewables only rose by 3 million tons of coal equivalent (natural gas increased by almost 4 mtce).

The ramifications of Germany’s coal exit are truly manifold – on the one hand, Berlin is one of the few coal-producing nations to take its CO2 emission commitments seriously and has managed to decrease its carbon dioxide emissions by some 7 percent y-o-y in 2019 alone. It has spearheaded the European Union drive to decrease the continent’s emissions regardless of the platform. The 2038 phase out of German coal seems like a fairly feasible objective, buttressed by a draft bill which will seemingly soon be signed into law. Replacing lignite will be a tough call as it is cheap and located next to massive urban conglomerations – burning imported gas which also carries in it additional transportation costs might not be always the best option.

On the other hand, the decline of coal is happening concurrently with an unprecedented drop in Germany’s primary energy usage (the 2019 level plummeted to levels unseen since the early 1970s) and the nation’s industrial output might suffer as a result. Moreover, the general view on the coal exit presupposes that Germany’s States will compensate for the end of coal mining by creating new business opportunities and reshaping people’s skills to better suit the needs of the 21st century. However, that is happening only in a fragmented fashion – unemployment rates in major coal-producing hubs like Gelsenkirchen or Dortmund still amount to roughly double of the German average.